As I mentioned in my post yesterday I had chutney cooking in the oven while I was working (and blogging - shhh don't tell the boss that I multitask, drat that's right- he reads this!).

Yes I swear to you this chutney is that easy. No standing over a pot for a couple of hours waiting for the chutney to thicken, worried that it will burn. I chopped the ingredients then put them in the oven to roast and then put it all into jars. How easy is that!

Oh and did I mention it is some of the best chutney ever. My husband said it was like a Barkers chutney (now you need to understand that is the highest praise possible from him. Barkers in Geraldine make the closest to homemade tasting of all jams, chutneys, sauces etc).

The recipe I used was based on a book published last year by my sister in law. Deborah Hyde-Bayne. Called Coromadel Flavour. They live in the Coromandel and these recipes are with the seasonal produce from there. This book was three years in the making. Debs has worked hard and it is a beautifully produced book.

Anyway the recipe I used as a basis was the Roasted Feijoa Chutney recipe. I used my blackboy peaches. I altered a lot of the recipe as the peaches are a lot less subtle than feijoas. So I did not use the whole spices that she used but supermarket bought ground spice. The rest of the ingredients were just what I had in the cupboard so there was a bit of substitution. But when it comes to feijoa season I am going to follow the recipe to the hilt. I loved the fact that the recipe was low salt too.

If you want to buy one of her books just click on the link above and it will take you to her site. 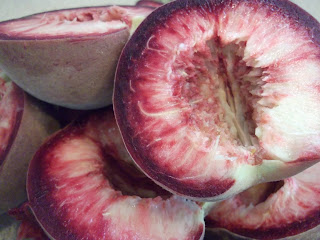 Cut the flesh of the blackboy peaches into about 1.5cm chunks. Chop the onion quite finely. Add all the ingredients together into a smallish sized roasting dish and mix well. I used a high sided non stick slice pan, the mixture looks quite dry. Leave it to sit overnight. This releases heaps of liquid and will fill the dish up.

Roast for 2-3 hours at 180oC (I roasted two hours and it was still really runny, so I fan baked it for 30 minutes. You need to do this until the mixture caramelises (goes thick and brown and sticky)

Spoon into sterilised jars and seal. Debs recipe says to leave a week before use. It was pretty yummy at the time. This was so delicious that I am going to make a batch double this size as it will be good for presents etc.

I link to these places

Well I decided to try making Annabel Langbein's sorbet that was on her current TV programme "The Free Range Cook, Simple Pleasures". It is so much easier to make than normal sorbet where you have to make a sugar syrup. But it left it a lot grittier and the berries have little pip bits that gave it a sort of crunch. It is nice, it is super easy and also is egg, gluten, fat and dairy free. But the boys did not like it. So I also made some real fruit icecream for them. Putting them both together in the same dish worked well as the smooth icecream meant the crunchy sorbet was not overpowering.


Annabel Langbein Berry Sorbet
I did 1/2 recipe and that was a lot.
500g frozen berries into the food processor, add 1 cup castor (or superfine) sugar and 1 tablespoon of alcohol (I used creme de cassis from Barkers). Process till smooth (this took a wee while) Put in the freezer for at least two hours before serving.

My real fruit icecream
Put frozen berries into foodprocesser, add icing sugar to taste - blend. Then put in some vanilla icecream and  whizz until it is all well mixed. Yummy on the spot and refreezes well.

I join up with these links and parties

This dessert is sooo simple and easy. Tasty tasty and healthy. Egg, Dairy, Gluten, Fat free (fantastic for you Kerryn).

If you want you can make some nut brittle and sprinkle on top. Or this is gorgeous for breakfast with some homemade muesli sprinked on and a bit of Greek Yogurt (so long as you can eat dairy!)
Posted by Schulz Family at November 20, 2012 No comments:

Baking and a busy day

Well today first thing I made rice bubble biscuit. This needed to be gluten free and dairy free, as Mieke is intolerant of both. So I adapted the recipe to suit. I have no idea when I first got this recipe or from who as it has been around since before I was a child.

Rice bubble cake
4 Cups Rice bubbles (make sure they are a brand that are gluten free - I used Kelloggs) into a big bowl.
then into a pot put
1 1/2 Tablespoons honey
3 1/2 oz diary free spread - i used Olivio as it is made from olive oil (watch out as some still have dairy in them)
4 Tablespoons sugar
melt all together and then bubble at low heat stirring until the colour darkens and the mixture thickens. Pour into rice bubbles, mix together quickly as it sets fast. Put into a lined tin, press down firmly with wet hands and cut. (it is very hard to cut it once it is set). I keep it in the fridge until eaten.

Then we went outside and Eli mowed the lawn for the first time ever! Wow at 7years old. He was dead keen and did an amazing job. So Aaron dug all the compost out and we put it all around the garden. I weeded all the strawberries and pottered like that. The weather was gorgeous but then it went very strange and blew and rained. So inside we came and I made some old fashioned Ginger Gems. I just used the recipe from the Edmonds Cookbook. After a lovely afternoon tea Mieke and Alex came to stay for the night. So all is on!!! Aaron has both the kids on his knee reading to them at the moment. I have dinner ready, Mieke has had two pieces of her rice bubble cake and the boys are watching Chip and Dale. 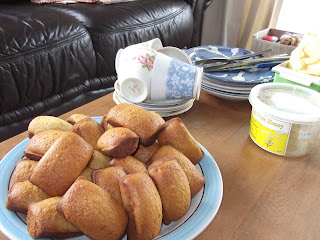